This yellow-billed cuckoo flew into a window, and has some head trauma issues and a sore shoulder. He’s getting pain medication and supplemental tube-feeding while we monitor his condition for improvement. Read these tips on bird-proofing your home to prevent injuries like this during the busy fall migration.

Yellow-billed cuckoos may look similar to the robins, starlings, and other songbirds in your backyard, but they actually belong to a completely separate family of birds. Songbirds – or passerines – are defined by their feet, which have three toes forward and one toe facing back. Cuculiformes are “zygodactyls” – meaning they have two toes facing forward, and two facing back. 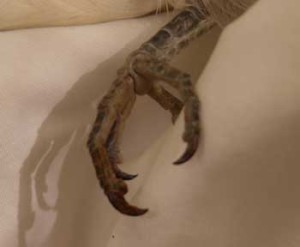 Cuckoos are famous for laying their eggs in other birds’ nest, but yellow-billed cuckoos are known as a “facultative parasite” – this means that they make a nest and raise their own babies, but will also lay eggs in the nest of a different species if the opportunity presents itself. Cuckoo babies grow up incredibly fast – from the egg being laid to the baby leaving the nest, it takes only 17 days!