These babies had a mom…

Home » Blog » These babies had a mom…

Each one of these babies has a unique story that has found them orphaned and in need of urgent assistance. With their parents out of the picture, TWC must mimic their mother’s care as closely as possible, providing these helpless babies with the nourishment they need to replace the food their mother would have brought them, making sure they’re warm without her body heat and so much more.

This type of species specific care and attention would not be possible without the help of caring people like you. 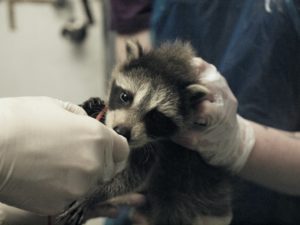 On Friday April 7th, Stephanie from Toronto was surprised to find four small baby raccoons lying on the ground where they had fallen from their attic nest. She told TWC’s Wildlife Hotline staff that her landlord had hired a removal company a few days before to take care of a raccoon living up there.

Stephanie and her neighbours tried desperately to reunite the family. They even built a ramp leading all the way up to the attic and waited for hours for the mother to return. When the mom didn’t, Stephanie arranged to bring the hungry, scared babies to TWC.

When the two little boys and two little girls were admitted they were bright and responsive but also thin and dehydrated, as most orphaned babies are upon admission. They were immediately given fluids, injected under the skin to treat their condition. 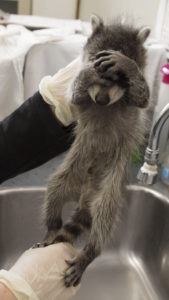 When a baby raccoon is scared they cover their eyes because, in their mind, If they can’t see us, we’re not there!

The growing babies are being hand fed a special formula for raccoons four times a day and are still receiving fluids twice daily. It is common for newly admitted babies to receive lots of fluids because they frequently arrive dehydrated, and switching from mother’s milk to artificial formula can sometimes be hard on their little systems.

They are now sharing a cozy enclosure where they can cuddle, keep each other warm and offer support to one another as they deal with the new reality of being without their mother.

TWC is Canada’s busiest wildlife centre, operating entirely on donations. Without caring people like you these babies would have nowhere to go.

Trapping and relocation may seem like the humane alternative to some pest control methods, but it is actually illegal and can do a lot of harm.

When mother raccoons are trapped and relocated their babies are almost always left behind. If these orphans aren’t found, they die without their mother’s care. And 70% of adult raccoons relocated to unfamiliar territory don’t even survive three months.

These mistakes happen and there are not enough resources to care for all the orphans that are created as a result – that’s why your help is needed.

Your can sponsor a wild baby now, and give helpless orphans like these little raccoons a second chance to live out a full life in the wild.

Click here for more information on how to humanely deal with conflicts with raccoons or call our Wildlife Hotline at 416-631-0662 and our experienced staff will be happy to assist you.