On the chilly spring evening of May 13th, when Brenda from Brampton found three baby killdeer alone on a grassy knoll, there were a few other birds trying to peck at them. She shooed the other birds away and picked up the helpless orphans.

Killdeer rely on their parents to keep them warm and safe during the first days after they hatch. They protect them and act as a role model for just over a month until the babies are ready to fly. Without this constant attention they cannot survive. 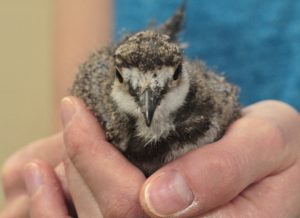 Killdeer often lay their eggs on the ground without building a nest. As soon as their babies hatch, they can run around and feed themselves.

Although they don’t feed their babies, Killdeer are attentive parents. They watch their young constantly, brooding and protecting them, their chicks sleeping and keeping warm under their feathers at night. If a predator approaches, the parents will distract them, leading the danger a safe distance away by pretending their wing is broken. When the predator is far enough from their babies the parent then flies away to safety.

Despite their careful parenting, adult killdeer may be taken out by a predator like a fox or a cooper’s hawk, leaving their babies orphaned. On the rare occasion this might even happen while they’re trying to distract the predator away from their young.

Even if their parents outsmart their enemy, because killdeer babies are not in a nest this leaves them at higher risk of wandering too far from their parents and being taken by a predator while they are alone. They are so light that even a strong wind can blow them away from their families.

For these reasons, killdeer are often brought to TWC in need of care.

TWC’s Wildlife Hotline staff provided short-term care instructions for Brenda’s baby killdeer saying to “give the babies a heat source and not to make contact with them unless completely necessary as human contact is very stressful for them. Many times we see these fragile baby birds die within the first 5 hours of becoming orphaned from hypothermia or stress.” These instructions were followed carefully and the babies were brought to TWC the next day. 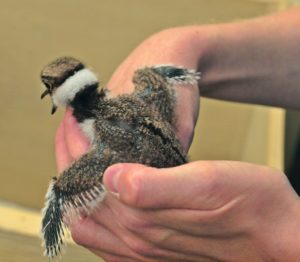 Shortly after Brenda’s call, Dean found another little baby killdeer running down a residential street in Toronto all alone. “He couldn’t get up the curb,” Dean told hotline staff when he brought in the baby he’d rescued.

Medical staff did very quick exams because the babies were already weak and stressed from human contact. Despite having been pecked at by other birds, the first three that came in had no obvious injuries and all four were quiet yet alert upon admission. They were all very hungry and dehydrated and were immediately given fluids and placed in a warm, quiet incubator furnished with soft fabric at the bottom for them to curl up in, clumps of grass to hide behind and a feather duster.

Once they were in the warm, quiet incubator all four started displaying regular baby killdeer behaviour, peeping loudly, running around and pecking at food. Three times daily, the babies are fed a healthy diet including seeds, mealworms and invertebrates like blood worms, mosquito larvae and brine shrimp.

Support from caring people like you is making all the difference for these helpless babies and so many more.

Please consider sponsoring a wild baby today and bring specialized care and comfort to the wild babies who need it the most.