By Toronto Wildlife CentreMarch 5, 2019May 22nd, 2019Uncategorized
No Comments

The coyote took a few nimble steps and stopped, standing in the snow wheezing painfully as the kill snare hung from his neck. The wire cut deep into his throat, partially strangling the weakened animal – he could barely breathe. He had become trapped in a neck snare that had been improperly anchored, which was the only reason he was able to pull himself free – but the wire was still wrapped tightly around his neck. Tears came to Ann’s eyes when she saw the poor coyote on her property in Fort Erie. He, along with his mate and five young, had been welcomed visitors in her yard for over 3 years. She had seen him a week prior with what she thought was a branch hanging from his fur, but days later the coyote seemed thin and lethargic; she realized to her horror it was a snare. When she saw the father coyote – who she named Faith – in such a traumatic state she had to get him help! She was very concerned about him, and the fate of his family.

Lesley from Coyote Watch Canada received the emergency call, and knew to contact TWC to rescue the severely wounded coyote. It was a race against time to save this animal’s life. 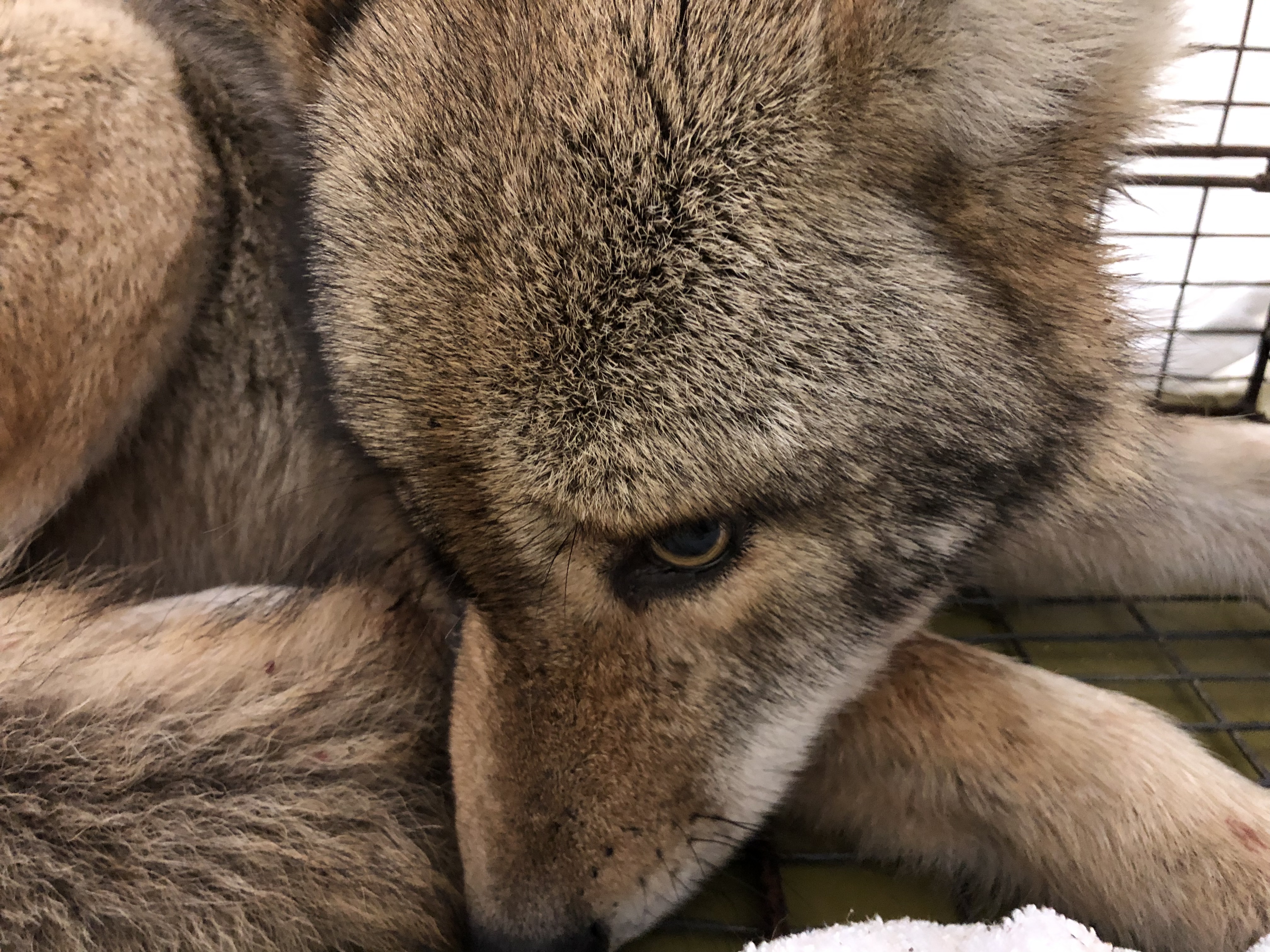 “I had trouble trying to fathom what happened to him,” said TWC’s Rescue team leader Andrew. Hotline staff had notified Andrew about the dire situation, and they discussed the best plan to capture the injured coyote. Andrew gathered a team of seven people: experienced rescue volunteers Sara and Harry, Lesley and Becky from Coyote Watch Canada, and Ann and her husband Fred. Faith was terrified and hiding in a wooded lot, while Andrew called out instructions to the team who circled around the coyote. They each got close enough to hear Faith gasping desperately for air. Andrew began carrying out a technique to encourage the coyote to submit for a smooth capture, and in his weakened state Faith lowered his head and lay down in the snow. As they approached the coyote attempted one last escape, stretching his body out and jumping under the branches of a nearby tree, crouching low to the ground.

Andrew quickly placed a Y-pole over him so he wouldn’t escape, and then some of the rescuers held Faith down gently but firmly. Andrew used three different tools to carefully cut the inhumane snare off the coyote’s badly wounded neck, and then gave Faith some time to calm himself before making the two hour drive to the wildlife hospital. TWC staff and volunteers were buzzing with shock and concern after he arrived – how could anyone cause this much suffering for an animal!? Senior Wildlife Rehabilitator Heather carefully cleaned and treated the severe gash around his neck, but was devastated to find the snare had cut half way through his trachea. After initial emergency treatment, Faith was moved to oxygen caging to help stabilize him. 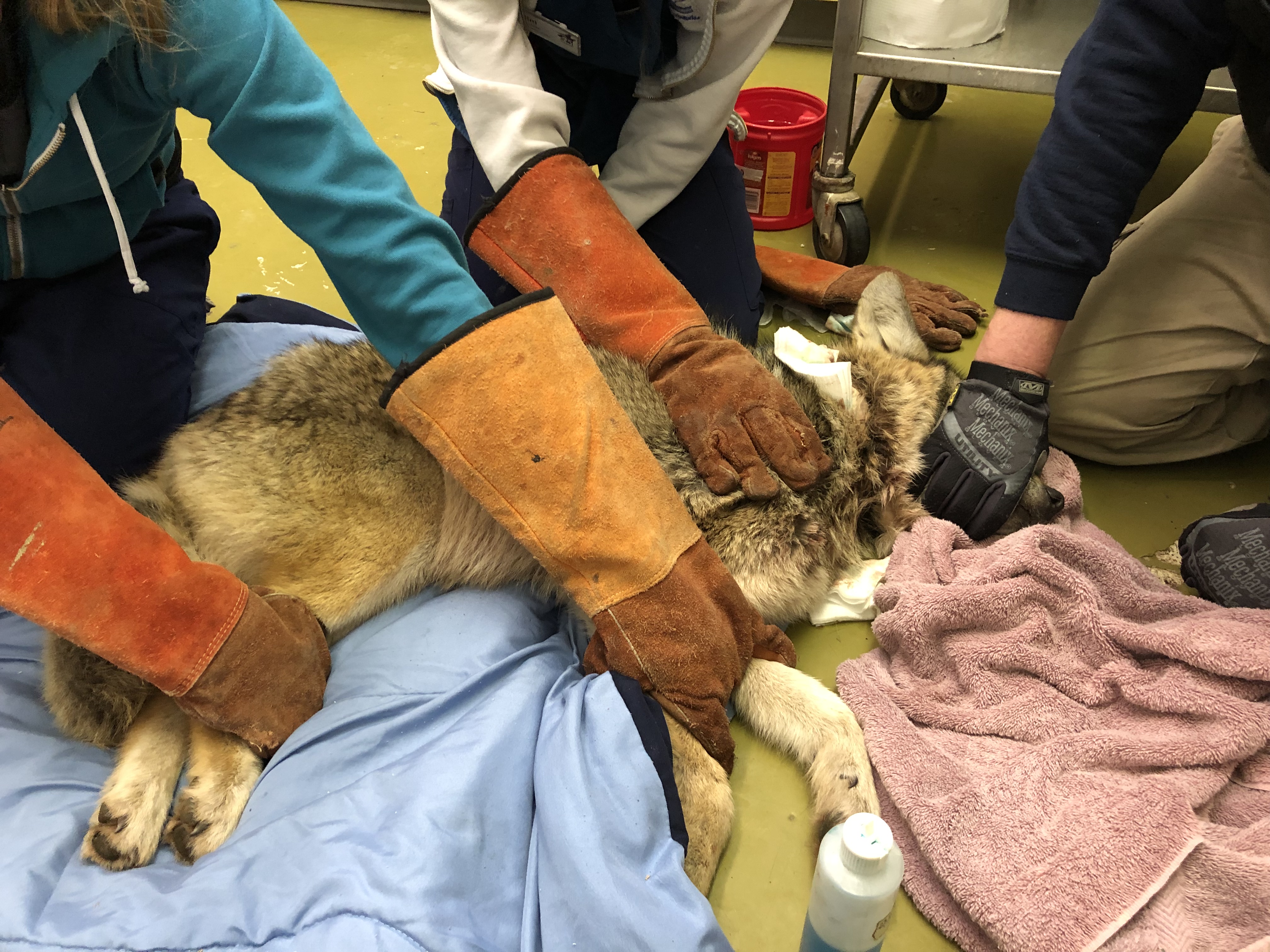 Now in TWC’s care, Faith’s life hangs by a thread. He is weak but struggling to survive. Everyone at TWC is devastated by the serious damage and suffering this infuriatingly legal but inhumane trap caused this innocent animal – the tight wire had sliced into Faith’s throat and cut half way through his trachea. TWC’s medical and rehabilitation teams are doing everything they can to reduce this poor coyote’s pain, mitigate infection and help him breathe.

Executive Director Nathalie Karvonen and Head Veterinarian Dr. Heather Reid have spoken at length about Faith’s condition and the best plan to save him. “This is not a common injury,” Dr. Reid said, expressing her concern to Nathalie. “It’s a ‘once in a vet’s career’ type of injury.” They decided a veterinary specialist experienced with tracheal injuries was needed to surgically repair the serious damage caused by the horrible kill snare. The surgery is scheduled for tomorrow. We are all rooting for Faith; that he will survive, recover and can return to his family in the wild. 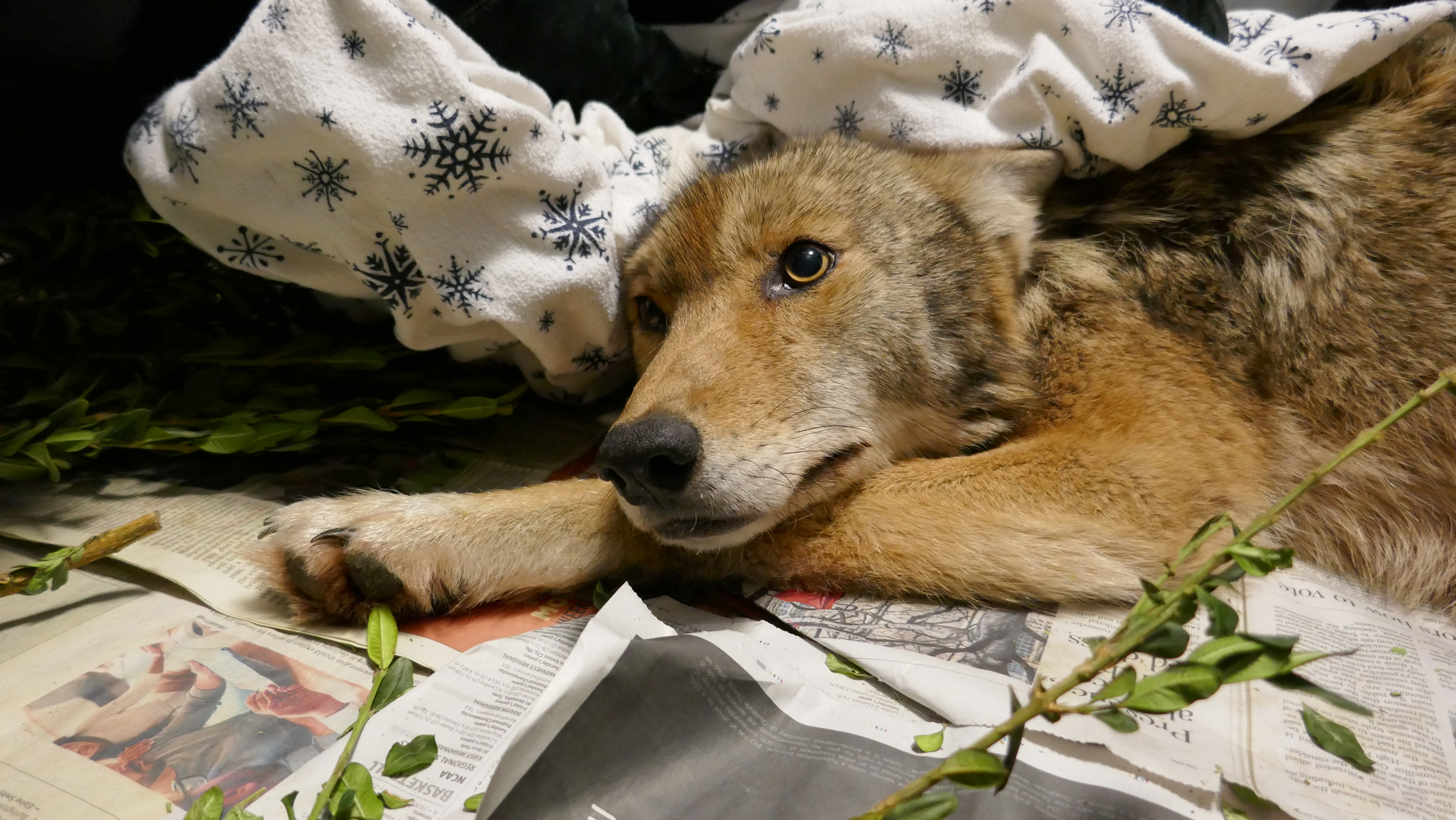 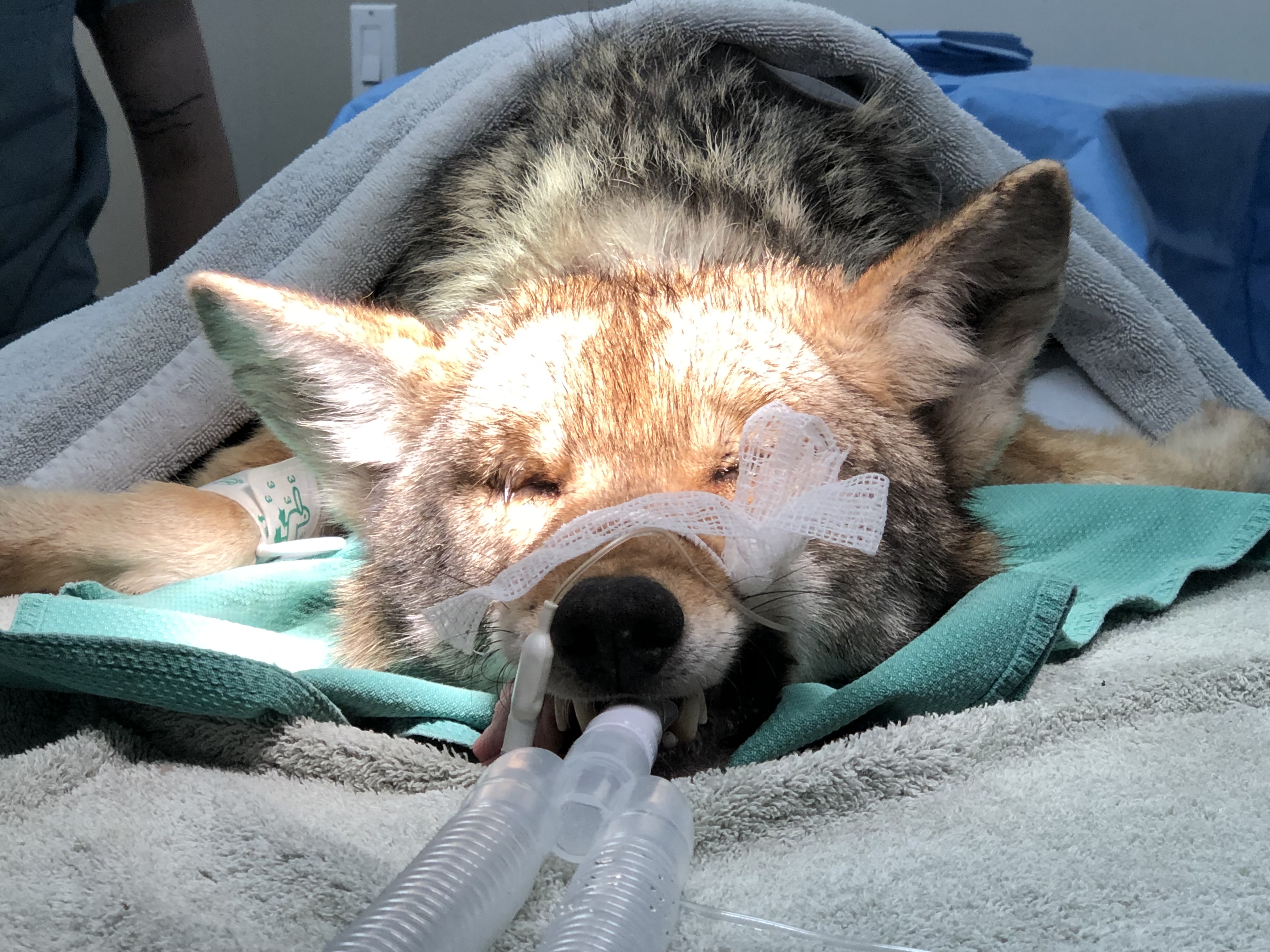 VEC’s staff donated their time and expertise to perform the intricate procedure to close the hole in Faith’s trachea and stitch the wound around his neck. TWC’s Veterinary Technician Naschelly and volunteer Veterinarian Dr. Karen Shearer were also on hand to help where needed. After 2.5 hours, the surgery was a success and Faith was taken back to the wildlife hospital to recover. But his road to recovery was far from over.

Faith’s breathing eased over the first few days after surgery, and he was given strong pain medication. His wound began looking better day by day, and he became more active in his enclosure at night when everyone had gone home. Weeks later, Faith’s neck was healing well! He was resting, eating lots of nutritious food and being monitored 24/7 by a camera set up in his enclosure. TWC’s teams worked hard to clean and monitor the wound, helping Faith’s neck heal as swiftly as possible so that he could return to his family; it was possible his mate was pregnant with a new litter back home and he would need to be there to help care for them!

Meanwhile, Faith’s mate came to the site of his capture almost every night and called for him, so Ann was overjoyed to receive the news when Faith was ready to return to his family. A few days later Faith was running across familiar fields towards his forest home; back to his family and his life of freedom in the wild!