“My neighbor found what appears to be a falcon chick. He has gone to the cottage and left the chick with me. I know he made some calls and I am trying to find what to do now.” 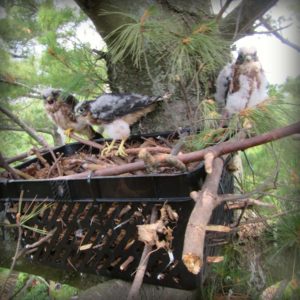 This story begins two weeks ago, on a hot summer day when Robert reached out to TWC for help. Wildlife Rescue Team member Stacey arrived on the scene and knew right away that action had to be taken. A second baby merlin was sitting not far from where the first had been found. Sadly, two more were nearby, but help had come too late for them.

Stacey prepared the surviving merlins for their journey back to TWC. Before leaving, she looked up – way up into the sky, scouring the trees and open air for any sign of adult merlins or the nest that was once home to these babies.

And there it was. Among the foliage of an evergreen tree sat a cluster of sticks and twigs; evidence that the babies were from this area, giving hope that parents could be nearby.

The next day, Stacey brought Rescue Team Leader Andrew to the site to attempt reuniting the two surviving baby merlins with their parents. With their original nest inaccessible to our team, some ingenuity would be required to make this work.

So of course they brought a grocery basket.

Yes, a grocery basket is the perfect item required to create a fake nest – it’s sturdy, and won’t fall apart in inclement weather. Stacey and Andrew got busy filling the basket with leaves and other soft debris and a perch was placed on the edge for the parents. It was hoisted up the tree and secured using heavy branches, sticks and twigs.

The babies were placed in a bucket and raised up the tree with a pulley. They were placed into the nest by Andrew who then descended the tree. And the waiting began. Using a “howler” – a device which mimics the sounds of wildlife – Stacey called out to the parents.

Silence filled the minutes in between the calls of the howler. Call. Silence. Call. Silence. Hearts were sinking – maybe the parents were not around after all. But after several attempts, and just as our team was about to turn away – swoosh! An adult merlin flew into the nest and began caring for the babies. Success!

Do you think it’s possible to do better than a success story? We think so.

Two days later, TWC received a call about another grounded baby merlin, this time in Aurora. It had fallen out of a nest in a very tall evergreen tree. Due to the height of the existing nest and the dangers it would present to our team, it was not possible to put this baby back up with its siblings.

Andrew suspected that the grocery basket Oakville nest could handle one more baby. Without further ado, a third baby merlin was added to the nest. As our team watched the baby settle in, they knew they made the right decision. Against the odds, another baby merlin was given the chance to grow up in the wild alongside siblings of its own species and with the care of adult merlins who would give this baby, and the others, everything needed to grow into healthy and capable adults.

Each wild animal admitted to TWC comes with a story. This is one, but there are thousands more. And each one is the result of the actions taken by our community to help them – people like Robert who reach out for help, and those who financially support the rescue and rehabilitation of sick, injured and orphaned wildlife.

TWC would like to take this opportunity to thank the Oakville Community Foundation for awarding TWC a grant to help sick, injured and orphaned wildlife in Oakville. We are so grateful for your generous support. This story is possible because of you.