When rescue volunteer Sara set out to find an injured goose, she found herself faced with a surprise rescue

It was a frigid day in January when rescue volunteer Sara got a phone call from TWC’s hotline asking her to search for a goose who reportedly had a large chunk of ice stuck to his wing.

When she arrived on scene and started her search for the injured goose, much to her surprise she discovered another wild bird in urgent need of help.

Sara found this poor mallard stuck in the ice on rocks on lake Ontario when she was out searching for the injured goose. 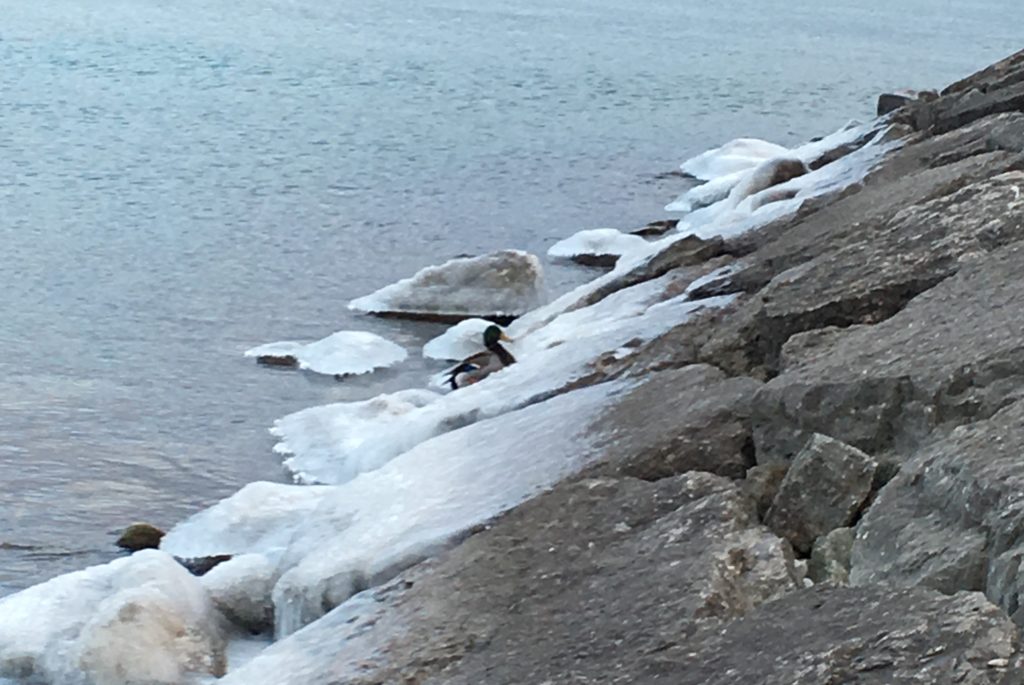 This time of year, Toronto Wildlife Centre rescues many waterfowl in distress.

With guidance from TWC’s rescue team leader, Andrew, Sara slowly and carefully freed the trapped bird from the ice, and placed him into a transport container lined with soft towels.

Sadly, the mallard lost some of his tail feathers, his waterproofing was compromised and he had some lacerations on his right wing. Waterproofing is extremely important to help birds keep warm and dry. Without it, it can lead to serious conditions like hypothermia.

Our medical staff has been diligent in helping him heal. When he arrived, they carefully washed all the ice off of his body, cleaned his wounds and ran routine blood tests, including testing him for lead poisoning.

The blood test confirmed that the mallard has lead in his system, presumably from nibbling a lead fishing sinker, or lead buck shot. Lead doesn’t degrade in the environment, so when it is discarded it can stay present for hundreds of years.

Unfortunately, lead hunting and fishing equipment is still legal outside of national parks int he province of Ontario, and it is common for waterfowl to have some lead in their system.

We’re happy to report that the mallard’s lead levels are decreasing, his wounds have healed and he is doing better.

Once his tail feathers have regrown, and his waterproofing has been restored, this mallard should be able to return to the wild where he belongs.

Here, the mallard joins another duck in care for a swim.