A surprise from underground!

Home » Blog » A surprise from underground!

“I have some baby chipmunks that I orphaned a few days ago.” 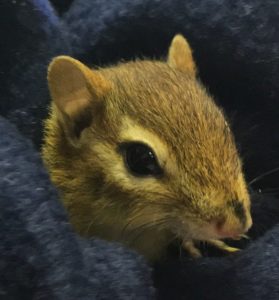 While excavating in preparation to build a new deck at her home in Burlington, Annaliesa’s brother accidentally dug up the baby chipmunks. One died and another was injured and was never seen again. Annaliesa was able to catch the remaining three.

Confirming first that their nest was gone and that they couldn’t be returned to their mother, hotline staff asked Annaliesa to get the newly orphaned chipmunks to TWC as soon as possible. Following their instructions carefully, she put the no-doubt frightened babies in a box with a hot water bottle and offered them some apple. 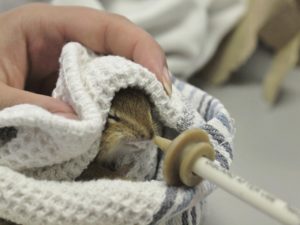 Upon admission, medical staff examined them immediately and thankfully found that the orphans were not injured. Although they were thin and thirsty, the chipmunks were energetic.

For the next two days the babies were administered fluids under the skin to help with their dehydration. Now, they are being hand fed a special formula for chipmunks three times per day and the volunteers in the nursery say they are good eaters!

At this time of year when baby wildlife face unexpected dangers, it’s people like you that ensure they have a place to go to heal and grow until they’re ready to face the wild on their own.

Will you consider sponsoring a wild baby to help wild animals like these little chipmunks who were disturbed from their nest and separated from their mother?