Toronto – July 25th, 2016: In recent weeks, there have been sightings of a sick coyote in Scarborough. The illness is mange; a debilitating skin disease which is harmless to people, but which makes affected animals very ill. Mange is treatable with medication and care which Toronto Wildlife 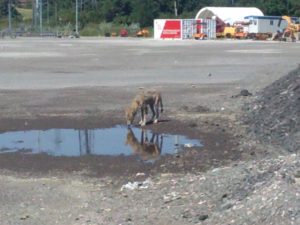 Centre (TWC) hoped to provide with their years of experience once the coyote was caught.

On June 29th, Toronto Police issued a Public Safety Alert about the coyote, saying he had mange and a “brain disease”, although they could not explain the origin of the brain disease comment. TWC staff advised police at that time that the coyote had no evidence of a brain disease.

On that day, TWC rescue staff had responded on scene when six police had guns drawn on the sick animal. They explained to the police that the coyote posed no danger, had no “brain disease”, and that TWC and Toronto Animal Services were working on catching the coyote (they are smart and difficult to capture). The police put the guns away.

Since then, TWC staff have spoken to people in the neighbourhood and tracked the animal, discovering an active den with three sick baby coyotes and that the coyote being reported was their father. The mother was recently hit by a car and killed so the sick father coyote has been struggling to care for the three pups alone.

At 10am on Saturday, July 23rd, police responded to another call about this coyote and this time shot and injured it. After following the blood trail, police could not find the injured sick animal but the injuries are assumed to be serious since there was significant blood.

TWC was open at the time of the shooting and Toronto Police have a direct phone number to us they have been given that they can call at any time. They did not call.

In the history of Toronto, there has only been one recorded instance when a coyote nipped a person. These shy, timid animals weigh approximately 30 lbs. and are not dangerous to people.

Residents in Scarborough, especially in the Euclid Ave. and Morrish Rd. area where the shooting took place, are asked to report sightings of the coyote to TWC @ (416) 631-0662. The babies may now be orphaned, and are very small and unable to care for themselves.  We fear this shooting will now result in four coyote deaths.

TWC is also calling for a review by Toronto Police of their policies on responding to animal calls; calls which should best be handled by Toronto Animal Services and / or TWC. After the unnecessary shooting of a coyote in Cabbagetown in February 2013, TWC staff reached out to police and offered information and training about local wildlife. Despite repeated offers, police never responded.