This big brown bat was found in December by Sean, a Mississauga resident. Bats can’t survive the harsh winter outdoors and must hibernate. Somehow, this bat accidentally awoke from his slumber and found his way into Sean’s living room. Sean noticed the small animal (big brown bats are quite tiny – this one weighed approximately 14g), and despite his fear, was able to put a box on top of him to prevent him from getting away. He planned to release the terrified animal outside – a death sentence for bats during the winter – but thankfully his co-worker Rob (a TWC volunteer) heard about the situation and offered to properly enclose the bat and transport him to TWC to be cared for throughout the winter. When he arrived, medical staff examined the bat; he had minor tears in his wings, which would take time to heal. The wounds were cleaned and treated, and he was placed in a warm enclosure and fed his first of many nutritious meals. 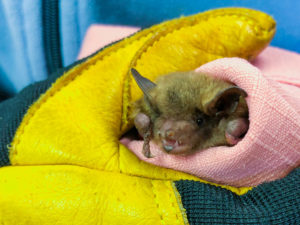 In the fall, migratory bats fly south (just like migratory birds) and bat species that remain in Ontario enter a torpor state (hibernation). If disturbed during the winter, a bat may wake up and will freeze, or starve due to a lack of food.

Big brown bats are insectivores (they rely on an exclusive diet of insects) and will eat beetles, moths, mosquitoes and even wasps! In the wild, they use echolocation to catch winged prey mid-flight. Bats in TWC’s care are offered various species of worms with added vitamins to balance their calcium intake. While bats enjoy mealworms, trying to eat them off the ground can be strange for them so TWC’s staff and volunteers often need to hand-feed bats at every meal until they’re able to eat independently. 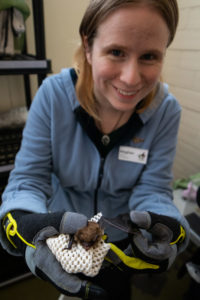 There are currently 27 bats overwintering at TWC. Staff and volunteers work many hours each day to make sure the bats are maintaining a healthy weight. Bat patients are unique individuals and Wildlife Rehabilitator Meghan loves to see each bat’s personality during feeding time, and how some learn faster and different ways to eat while on the ground. As the weather warms, TWC staff also tests each bat’s flight capabilities to make sure they have the best chance of survival when they go back to the wild. Once all conditions are suitable, they’ll be released to soar free through the night skies and catch flying insects once again!

Toronto Wildlife Centre gratefully acknowledges the financial support of the Pendle Fund at the Community Foundation of Mississauga, a registered charitable public foundation. Thanks to their support in 2018, wild patients admitted from Mississauga—including this big brown bat—were given a second chance at life in the wild.