TORONTO WILDLIFE CENTRE’S WILD BALL encompassed a lovely evening of culinary masterpieces, musical entertainment and a silent auction! Thank you to our sponsors and guests for helping to raise funds for the rescue, medical care and rehabilitation of sick, injured and orphaned animals.

This year’s signature fundraising gala took place on Thursday November 2nd at the Palais Royale Ballroom – a stunning venue located at historic Sunnyside Beach on the shores of Lake Ontario. 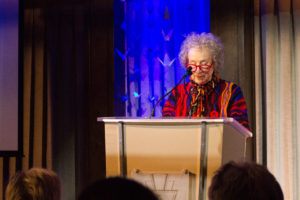 Since opening in 1993, TWC has become a vital and trusted community resource and the only wildlife hospital in the Greater Toronto Area. The busiest of its kind in Canada, TWC has helped more than 90,000 wild animals, reaching hundreds of thousands of people through our education and outreach channels.

Your participation in Wild Ball is helping to give wild animals in need their best chance at a healthy life in the wild. Thank you for attending!

Thank you to our featured special guest: 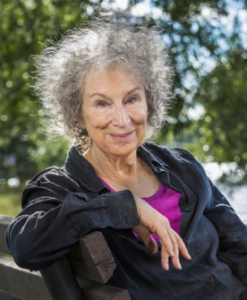 Margaret Atwood, whose work has been published in thirty-five countries, is the author of more than forty books of fiction, poetry, and critical essays. In addition to The Handmaid’s Tale, her novels include Cat’s Eye, short-listed for the 1989 Booker Prize; Alias Grace, which won the Giller Prize in Canada and the Premio Mondello in Italy; The Blind Assassin, winner of the 2000 Booker Prize; Oryx and Crake, short-listed for the 2003 Man Booker Prize; The Year of the Flood; MaddAddam and her most recent, Hag-Seed. She is the recipient of the Los Angeles Times Innovator’s Award, and lives in Toronto with the writer Graeme Gibson.

Thank you for spectacular musical performances by: 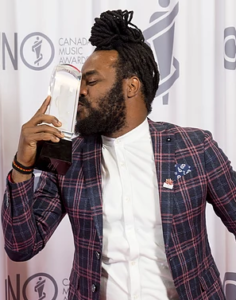 Jamaican/Canadian musician Exco Levi pays tribute to the founders of reggae music through a modern twist of poetry and sound. On a mission to deliver his message to the world, Exco has performed multiple European tours, California’s Reggae On the River, Spain’s Rototom, Canada’s major reggae festivals (including Jambana™ One World Festival) and even a feature performance in Zimbabwe. This multiple award winning artists songs are just as potent on his lips as they are on record and his ability to quickly engage and convince his audience has led to him being in high demand for many colourful collaborations including Busy Signal, Chronixx, Kabaka Pyramid, Donovan Germaine and other top Artists, Djs, promoters and producers worldwide. 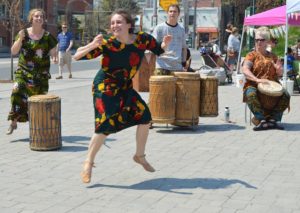 A love of the music of West Africa brought together the artists of Saboumando. Created in 2015, the group currently performs in and around Toronto. We have a focus on traditional rhythms, but also integrate contemporary music and dance in our work.   The word Saboumando can be loosely translated as “connected to each other and the source of all things, we will move forward”. The spirit of this message is what we strive to bring to our audiences! 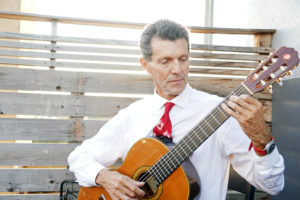 Thank you to Wild Ball host:

Roger Ashby of Roger and Marilyn on 104.5 on CHUM FM 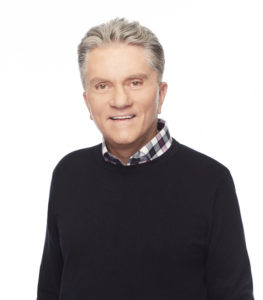 In the highly competitive world of Toronto radio, Roger is one of the least competitive people in the biz. Nevertheless, one of his career highlights is when CHUM FM became #1. That ranking, thanks to Roger’s solid role as the anchor of the Roger & Marilyn”show, has held strong despite many changes in the Toronto market.  Roger loves spending time with his friends in Toronto and at his cottage, while holding a beer or a golf club (sometimes at the same time!). He’s also involved with numerous charities including Big Brothers/Big Sisters of Toronto (honourary chairman), the CNIB, The Toronto Humane Society and the Toronto Wildlife Centre, among others.  Roger is known for his quick wit, storytelling ability and his encyclopedic knowledge of music.

Guests were treated to an incredible three course feast! Thank you to our host of incredible chefs: 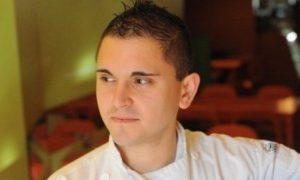 Doug McNish is a vegan chef with a fierce commitment to health & organics and the owner of Doug’s Public Kitchen, a top rated vegan restaurant in Toronto. He is also an award-winning cookbook author and teacher. He is regularly featured in numerous publications online and in print, makes appearances on national television, and is a plant based consultant to some of the world’s top luxury brands. www.dougmcnish.com

Brad Long is recognized as one of the top chefs in Canada. Currently he is chef and owner of Café Belong and Belong Catering. He is a co-host of the Food Network hit Restaurant Makeover and is currently in post-production of a new provocative food documentary. An active advocate for sustainable farming and ethical treatment of livestock, his talents are highly acclaimed by some of the country’s toughest food critics. 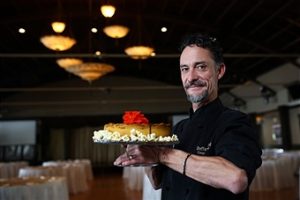 Steffan Howard is the Corporate Executive Chef of Palais Royale Ballroom, The Grand Luxe Event Boutique, The Exchange Cafe, Rotman School of Management and The Food Studio Catering and Banquet Operations for The Pegasus Hospitality Group. Chef Howard has been a long-time supporter and good friend to TWC ever since he brought in an injured squirrel for treatment many years ago. 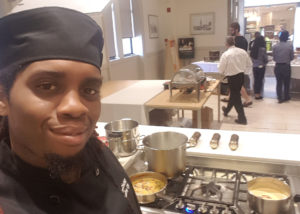 Jonny Crichlow is the Executive Chef for Amsterdam Brew House and Barrel House and has 20+ years in the restaurant industry. He has won and placed in numerous kitchen competitions and has a passion for Caribbean food and accelerated leadership.

Thank you to Presenting Sponsor:

Thank you to Wild Neighbour Sponsor: 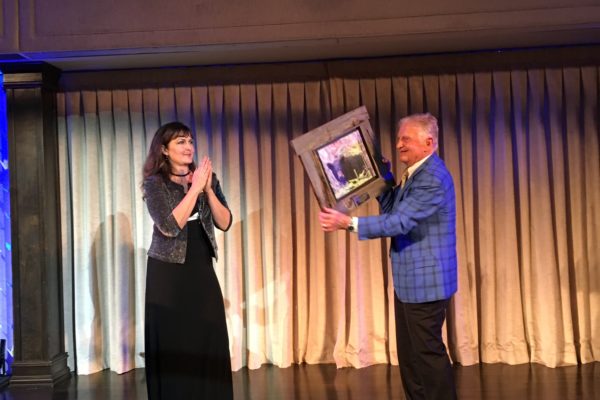 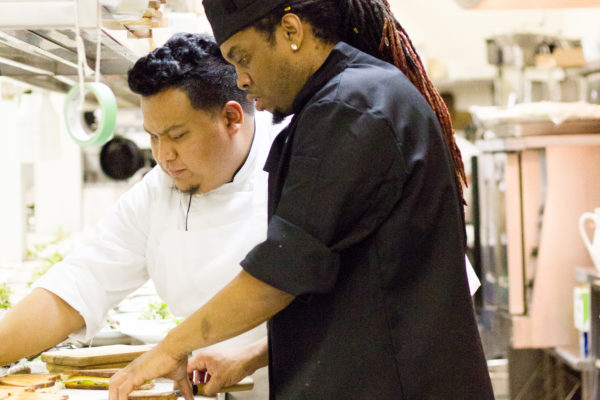 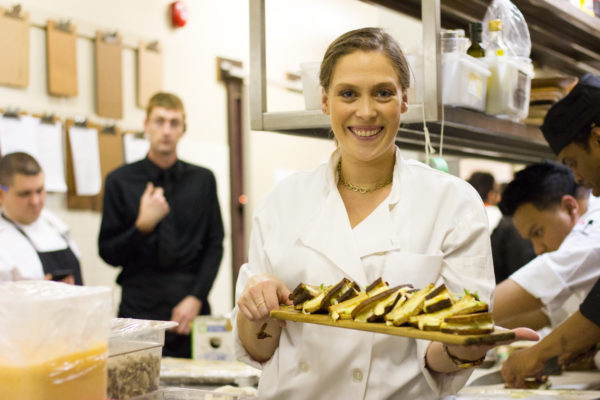 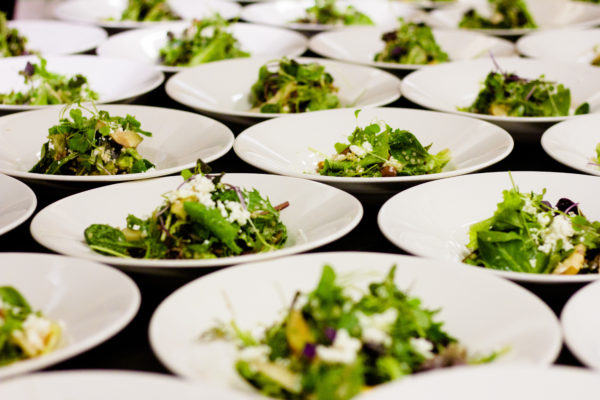 The vegan-friendly appetizers are ready to be served to guests! 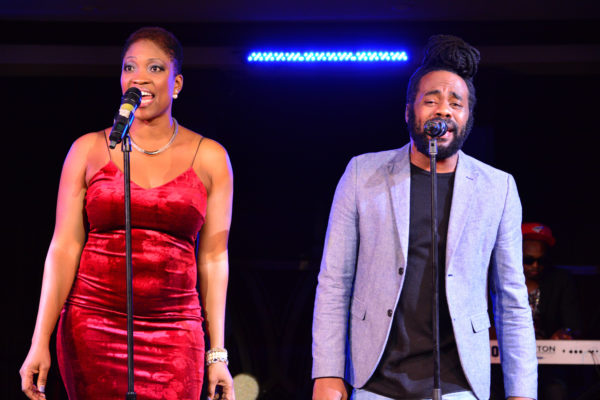 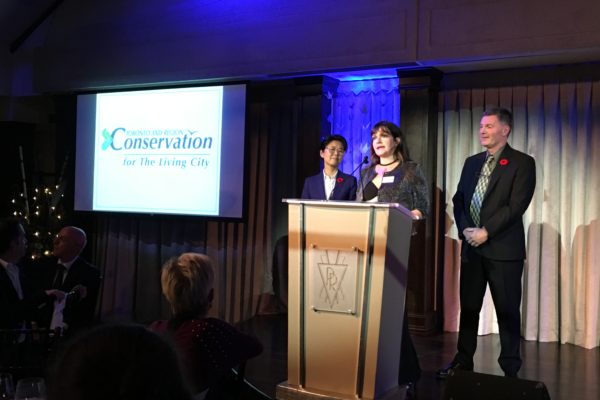 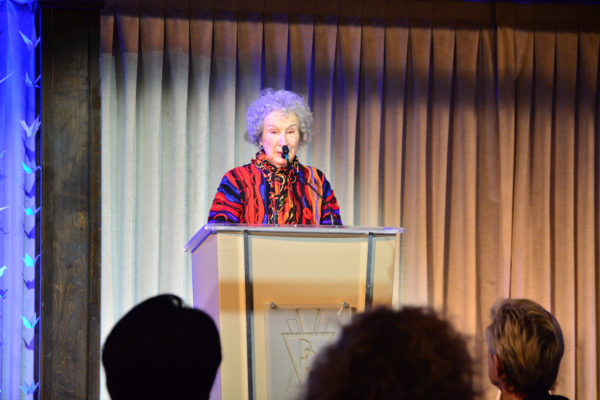 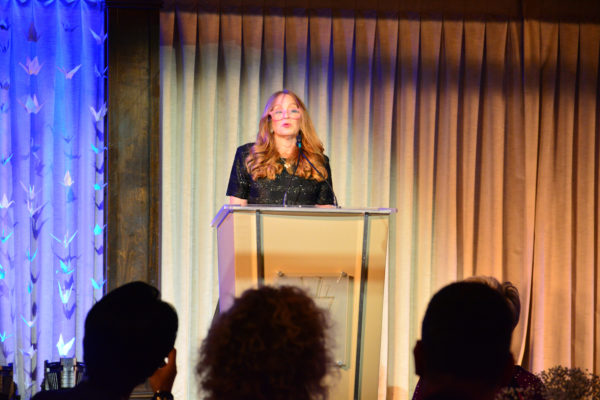 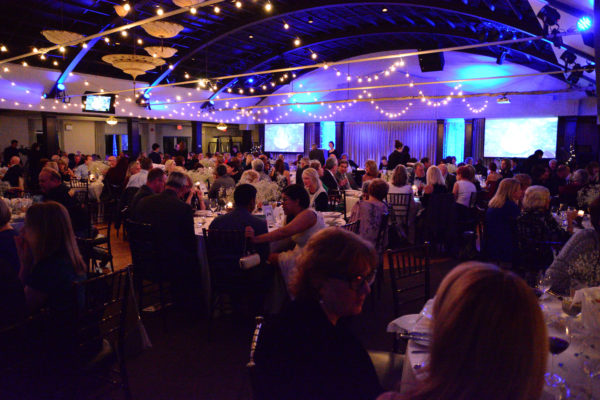 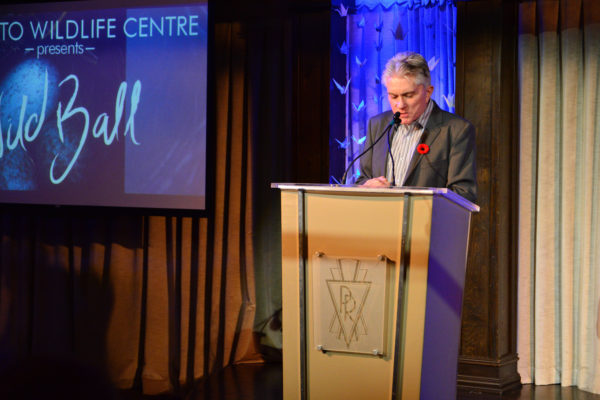 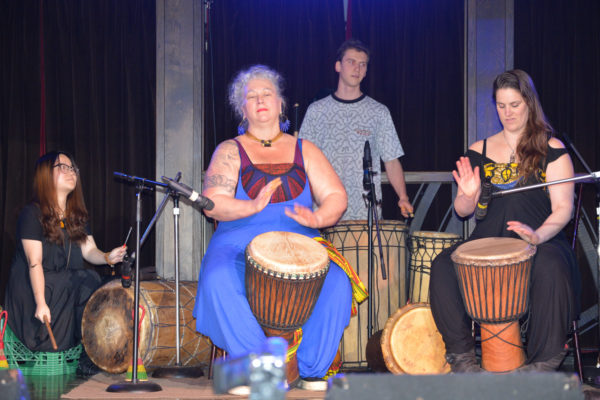 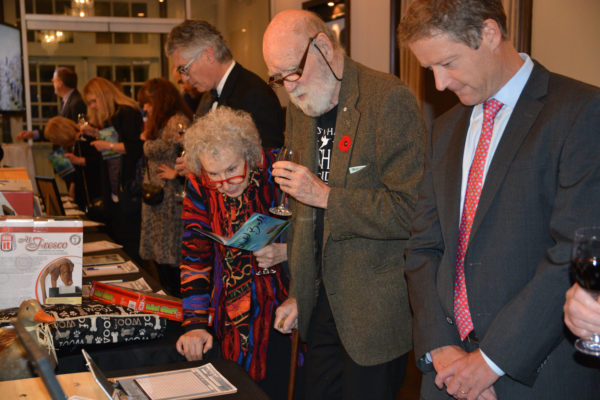 Margaret Atwood looking at prospects in our silent auction! 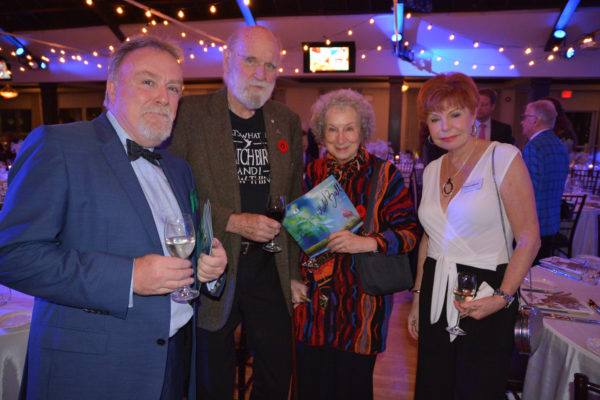 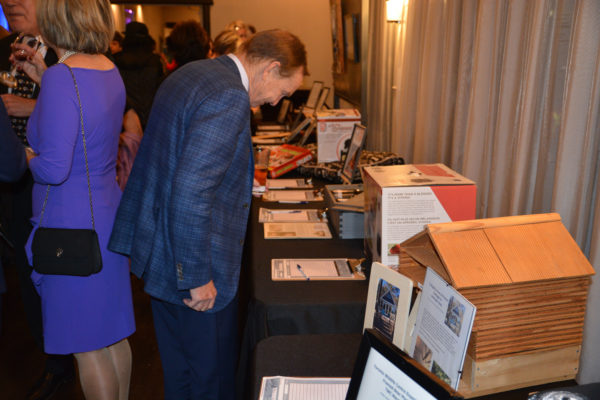 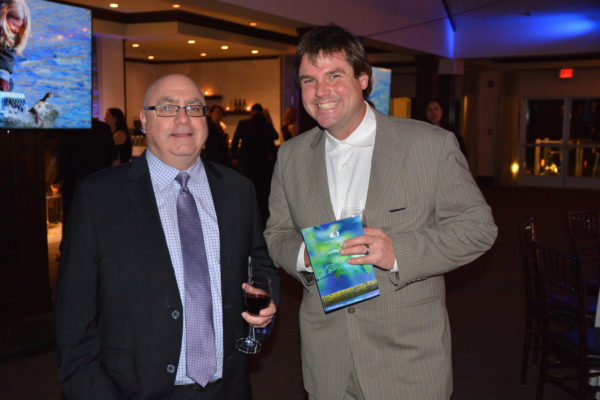 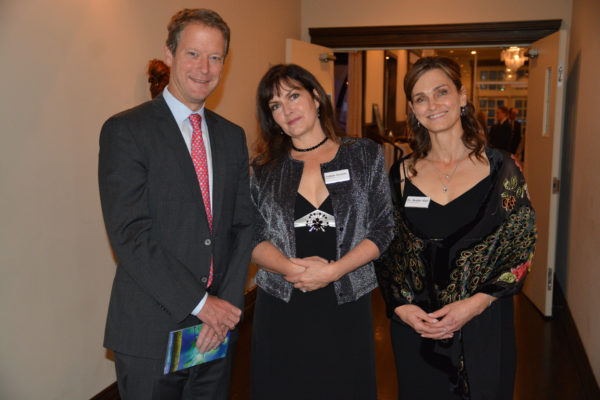 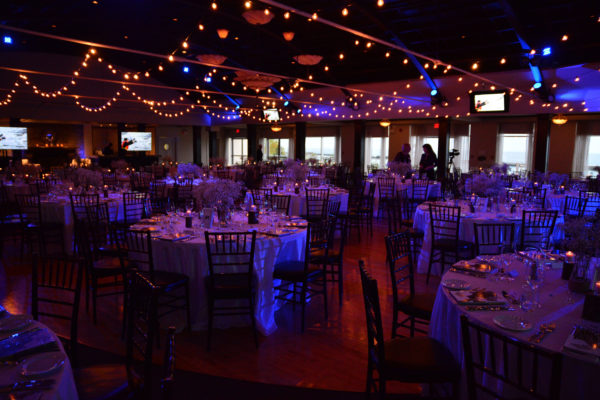 Ready to open the night at Palais Royale! 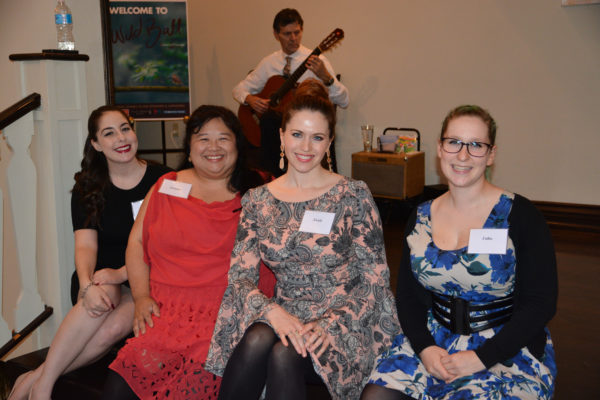 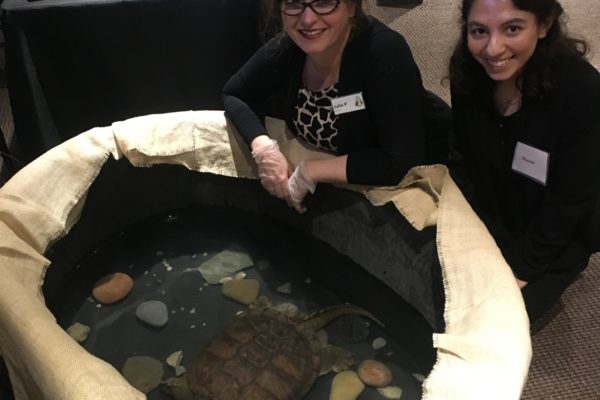 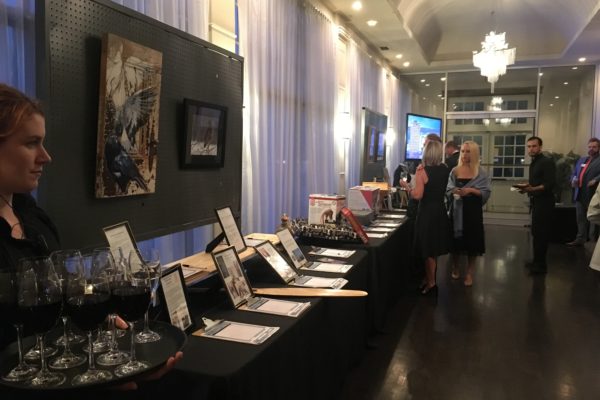 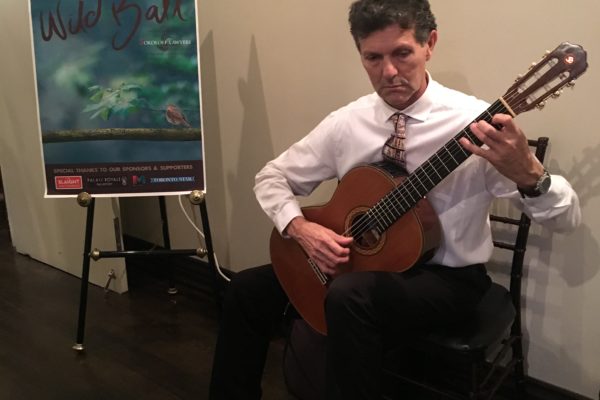