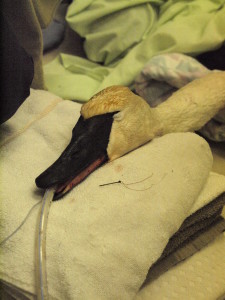 A rescued trumpeter swan recovers from surgery. The hook that caused its injury lies on the towel beside it.

Every year, Toronto Wildlife Centre admits animals that have been affected or injured by discarded fishing equipment. Hooks can get embedded and cause infection and injury, lines get tangled around feet and wings and impede mobility or cause constriction issues, and sinkers when swallowed can cause deadly lead poisoning.

On Monday, the Wildlife Hotline received a call about a trumpeter swan whose chest was covered with blood. The bird appeared to be struggling against a hook embedded in its tongue. 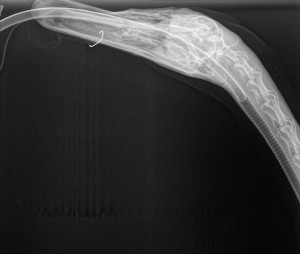 An x-ray of the swan’s head and neck clearly shows the fishhook.

The Wildlife Rescue team responded immediately. By the time they arrived on-scene, a member of the public had already contained the bird. He was rushed back to the Toronto Wildlife Centre for treatment.

Our veterinary team sprang into action, beginning with x-rays to determine whether there were any other hooks or sinkers in the swan’s throat or digestive tract. Luckily, the only thing that showed up was the hook in his tongue.

Surgery involved removal of the hook and sutures to close up the wounds that it left. A thorough examination confirmed that there were no other injuries – the blood on the bird’s chest had all come from the damage in his mouth. 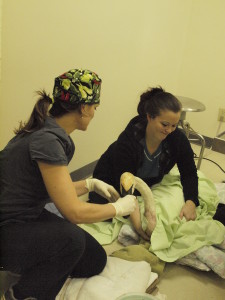 The swan is currently recovering in TWC’s Aquatic Bird Room, with daily swims in a large pool and lots of tasty food. Once his waterproofing improves (the blood did some damage to the natural coating on his feathers) we’re hoping to release him back home, where we’re told his mate is still waiting for him to return!

But this bird got lucky – a caring member of the public noticed his plight, and thanks to your support Toronto Wildlife Centre was there to step in when he needed help. So many animals affected by discarded fishing gear don’t get rescued at all. Some of the ones that do have injuries that are much more severe, or they’ve lived with the injury for so long that it’s worsened past the point of medical intervention.

If you go fishing, be careful! Make every effort to retrieve any snagged or broken hooks, lines, and lures. Use barbless hooks and switch to lead-free sinkers – both are much safer for wildlife.

If you want to help this swan with his recovery, and other animals like him, make a donation today. Toronto Wildlife Centre currently has 128 animals of 37 species in care, and none of them would have a chance without your help.