Size can be deceiving.

The weather is getting colder and that means the busy baby season at TWC is coming to an end (soon to be replaced by the busy water bird season). While there are a few stragglers who will have to spend the winter with us, most of our baby squirrels are well into the weaning process. Rock pigeons (and some rodents like house mice and Norway rats) will have babies throughout the winter, but the birds and the bees (and the reptiles and mammals!) have mostly settled down into their child-free winter routines.

Still, at this time of year, our wildlife hotline still gets calls about orphaned babies. But in most cases, these “babies” are actually adults, despite their diminutive size!

In October, golden-crowned kinglets were a frequent patient at TWC, usually the victims of window strikes. These tiny birds weigh in at a teensy five grams (about the weight of a nickel), even at their adult size! Next to ruby-throated hummingbirds, they are the smallest avian patients that we see at the centre. Many species of warbler are also mistaken for babies.

Another fall visitor that is often mistaken for a baby is the minuscule northern saw-whet owl. Measuring about 6” in height, and often weighing less than the familiar American robin, these fearsome predators time their migration to follow the little songbirds that make up most of their diet. Unfortunately, they too are very prone to window strikes. 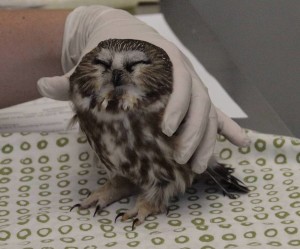 Despite his small size, this saw-whet owl is a fully grown adult. He was admitted to Toronto Wildlife Centre with a head injury.

A general rule is that if you find a wild animal in the fall and winter that you’re able to easily contain, it probably needs help. Put it in a cardboard box and keep it dark, quiet, and warm until you can speak to a wildlife rehabilitator. The good news is that — despite what your grandma told you — if it does turn out to be a baby, there’s a good chance we can reunite it with its parents, and they will definitely accept it back.

The Found an Animal section of Toronto Wildlife Centre’s website has lots of great information to help guide you through an encounter with a wild animal that you think might need help.