Every day more animals arrive at Toronto Wildlife Centre (TWC) in need of help; animals like the injured beaver found yesterday by police or the beautiful woodpecker who was attacked by cats in another neighbourhood at about the same time.

Although the goal is to treat and release every wild patient as quickly as possible, some will need to spend the holidays and the entire winter in the care of TWC; like wild animals who normally go into hibernation in the early fall.

For these animals, who will spend months in care, a highly nutritious diet is especially important. 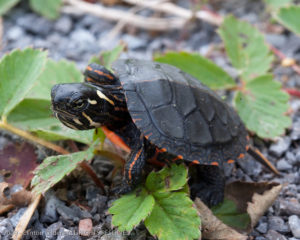 This little turtle’s mother was admitted to TWC this summer with an injury to her head. She laid some eggs shortly after admission, suggesting she likely got injured by a car while crossing the road to get to her nesting area.Because turtle populations in Ontario are declining, TWC incubates turtle eggs for up to 3 months, giving them the best chances of hatching; and the baby turtles are then released to the wild where they were meant to be.

The mother turtle was treated and released while her eggs were incubating, but this little one hatched very late; too late to return to the wild this fall. She will be just one of the turtles spending the winter at TWC, receiving the specialized care she needs to grow into a strong, healthy young turtle.

In the wild this baby would eat small aquatic insects and larvae (including mosquitoes), snails, earthworms, tadpoles, tiny fish and a variety of aquatic plants. In captivity we imitate that diet, feeding her insects and worms, chopped greens, nutrient-rich turtle pellets, and occasionally small fish.

Interestingly, painted turtles cannot move their tongues freely so to swallow properly they must eat while in water.

Mimicking their wild diets, while ensuring they have the full nutrition they need, ensures that wild babies like this turtle will be healthy and know how to recognize their natural foods once they are released.

Make a donation today and you will help feed this baby turtle and the many other wild patients whose lives will be saved at TWC this winter.