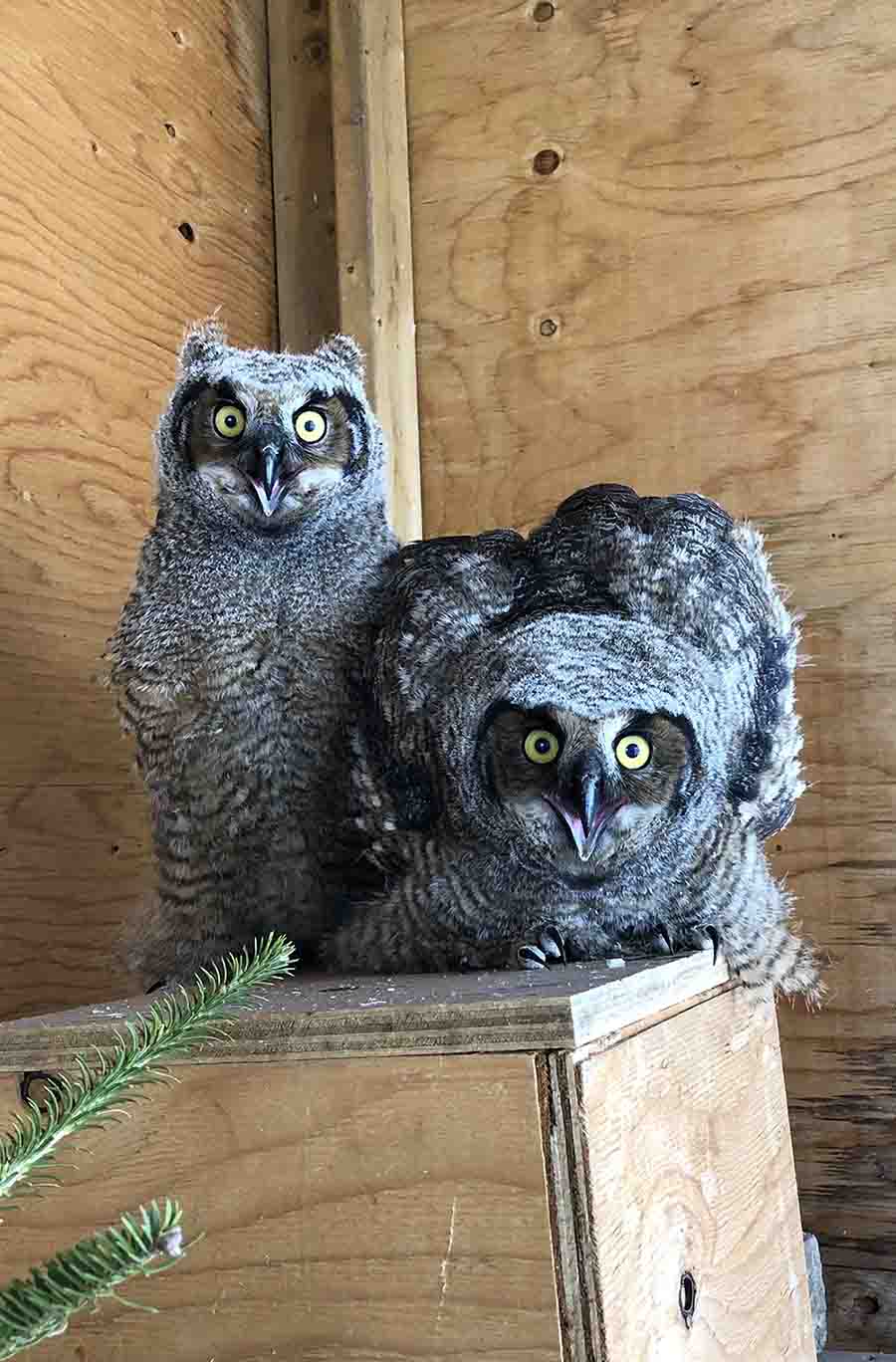 For the last five years, Dave had been visiting and photographing a beautiful pair of great horned owls who live in a local park. But this year was particularly special; the majestic owls had become parents to three babies. Since Dave is retired and lives in the area, he’s able to go out every day, sometimes even twice a day, just to see the precious owl family.

Three fluffy owlets appeared in Dave’s camera lens as he took shots of the large nest up the nearly 100-foot white pine. He called the strong and independent first-born baby Eddie, named after his 9-month old grandson. Then there was little Louie, who was a troublemaker just like his big brother. And finally there was quiet, well-behaved Alice, sitting so perfectly. Dave thought she must be her mother’s favourite.

One Sunday, the photographer arrived to the owls’ tree and readied his camera, preparing to take photos of the family. As he peered through the lens, Louie appeared on the edge of the nest. As he flapped his fuzzy wings, he accidentally clipped a branch that caused him to lose his balance. Dave held his breath as the baby owl tumbled down to the ground. He couldn’t see where Louie landed, so he quickly hurried over to find him.

Luckily, James, Jason, Penelope and Rebecca were on the other side of the path and had also seen Louie fall. With dozens of other photographers gathering daily and many dog walkers passing by, they knew the vulnerable owlet wouldn’t be safe. With such a great fall, the baby could also be injured, so James and Dave called TWC for help. 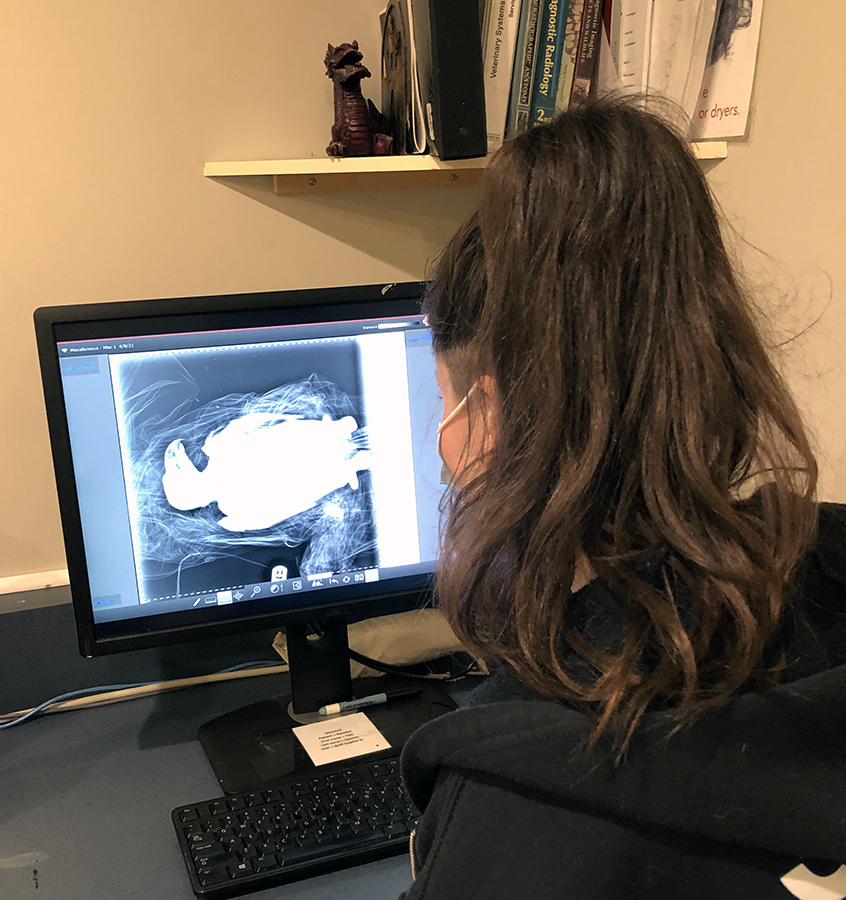 Our Hotline Team advised James to bring the baby in where he could be checked for injuries after falling from such an immense height. Dave quickly got a box and Jason was able to carefully get Louie into it. James then called a taxi and brought the owlet to TWC, where he knew the baby would be in good hands.

Louie was feisty when Caitie checked him over after he was brought in. He clacked his beak at her in warning, unaware the wildlife rehabilitator was only trying to help him. She gently proceeded with the assessment and took x-rays to make sure he hadn’t suffered any broken bones from the fall. She was happy to find Louie was healthy, and was spared of any injuries. To keep him comfortable, Louie was given a space of his own and nutritious food to fill his belly. He clacked loudly as Wildlife Rehabilitator Kat entered his enclosure to feed him. He puffed up his feathers trying to convince her he was a big, scary owl she shouldn’t mess with! Louie had a big personality, and he was more than ready to be returned home once the park was open again to traffic. 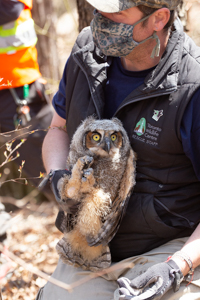 James and Penelope arrived at the park early Tuesday morning and were watching the remaining great horned owls. Eddie was perched on the lowest limb of the tree, which was still a shocking 40 feet up. Poor Eddie lost his balance and was unable to catch himself. Just like his brother before him, Eddie fell to the ground. Thankfully, James was able to get Eddie into a carrier and Dave watched over him until Sarrah and Andrew from the Rescue Team arrived.

After learning about the second owlet falling from the nest, Sarrah and Andrew decided to leave Louie at TWC until his brother could be examined for injuries and the pair could be re-nested together.

Sarrah carefully transferred Eddie over to a box where he could rest comfortably while they scoped out the situation. They were shocked to see the great horned owl nest near the top of the nearly 100-foot tree – although well trained, they didn’t have the professional equipment to safely scale a tree that high. So they began thinking of a plan to get the babies back home – they would need the help of an arborist. 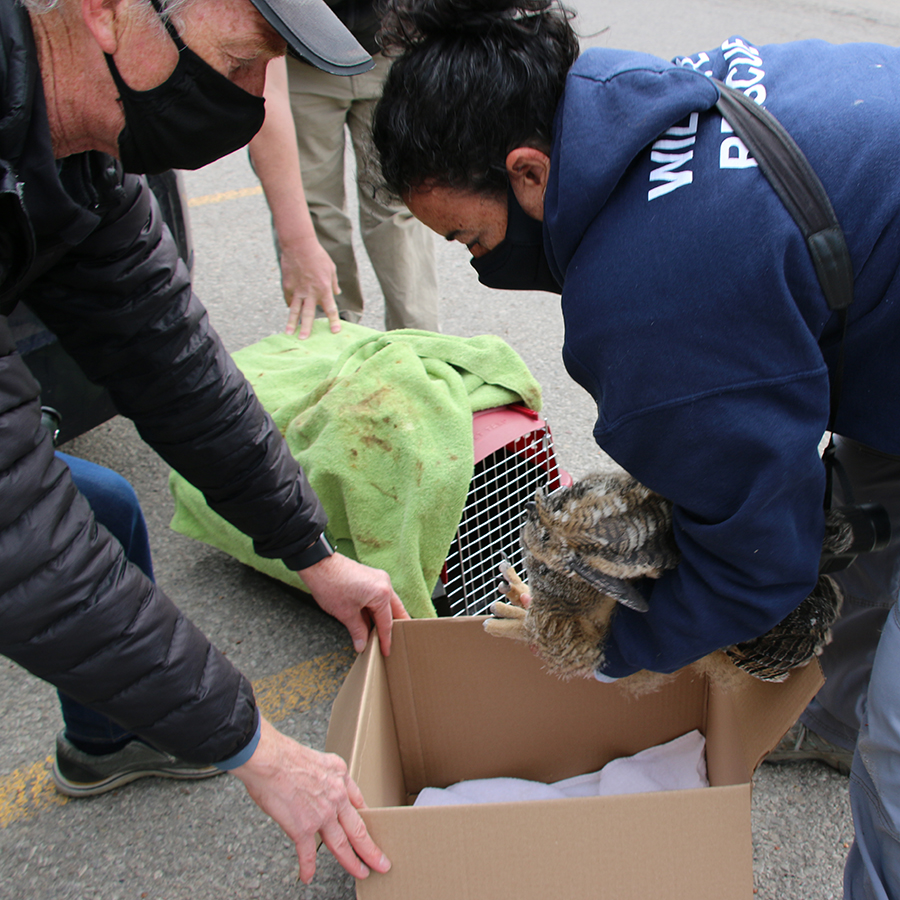 Dave assists Sarrah as she transfers Eddie into the box

Despite being in the middle of exams and preparing to move to Alberta, an arborist named Jake was willing to get the baby owls back up their tree the next day. He was assisted by his friend Joel, and was shown how to properly hold the baby owl by Andrew. This was crucial for the moment when the owlets would be hoisted up one by one, and Jake would place them near the top of the tree. 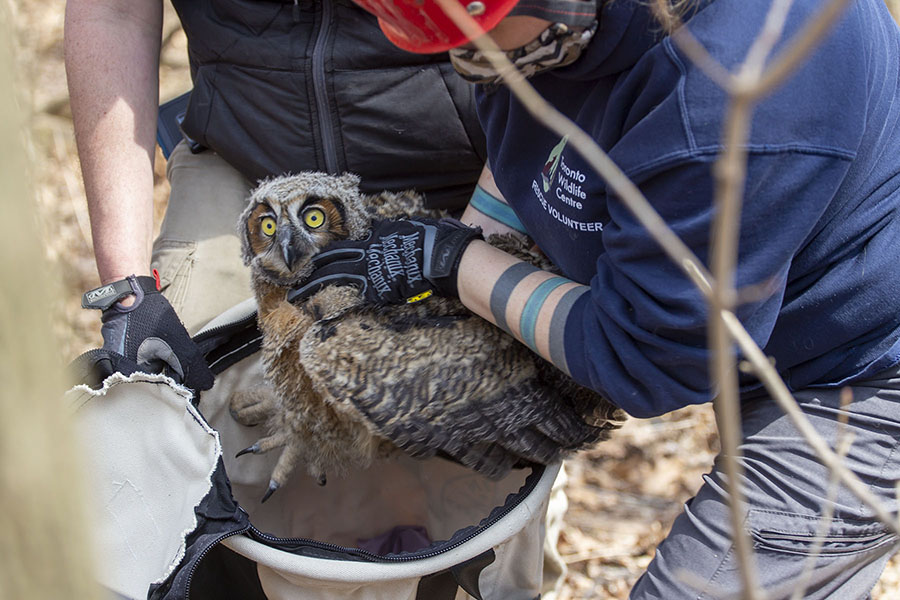 Emily prepares Louie to be hoisted up the tree. Photo by Ann Brokelman.

Jake wouldn’t be able to use climbing spurs which could damage the tree and lead to infection. Instead, he set-up a pulley system by propelling a weight over the lowest branch. It took several tries but once the system was in place, Jake was able to move up and down the tree without causing any damage.

Louie was more rambunctious than his elder brother, so Andrew and Emily decided to hoist Eddie up first. They gently put him into a sturdy canvas bag which would keep him safe as he was lifted up to Jake, who was waiting at the top of the tree. Dozens of photographers watched through their lenses as Jake carefully removed Eddie from the bag high up in the white pine and placed him on a branch near the owl nest. Little did Jake know, an adult great horned owl was also sitting near by, watching him closely as he handled the babies.

Soon it was Louie’s turn to be lowered into the canvas bag and lifted nearly 80 feet into the air. Again, Jake confidently handled the owlet just like Andrew had showed him and placed Louie on a branch just below Eddie. The two brothers stared at Jake with bright yellow eyes as he backed away and descended away from the nest.

The crowd of spectators below clapped as they watched Jake come down. The great horned owls were now in their tree with the rest of their family. The crowds dispersed and the heroes went home feeling good about the daring rescue. Jake felt this was such a special experience for him.

Unfortunately, less than 24 hours later, the Hotline Team got a heartbreaking call… Alice was seen practicing her flying and sadly was found on the ground, unable to get back up to her nest. The Rescue Team met up with Dave who helped keep Alice safe until they arrived. Although she was healthy and didn’t sustain any injuries, Alice was now the third owl to be displaced from her home. 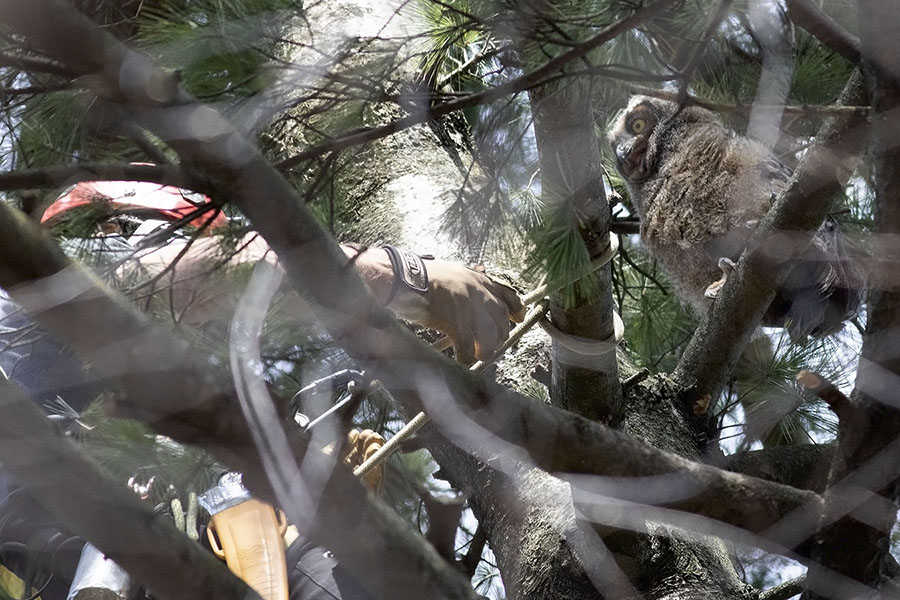 In the wild, it’s normal for young owls to leave the nest as they fledge, and adults are able to fully care for their babies on the ground. However, due to the high traffic nature of the park and the nest being so close to a trail frequented by people and dogs, it wouldn’t be safe to leave the owlets exposed on the ground.

The very next day, Louie was also admitted back at TWC after he fell from the pine tree a second time. Our experienced teams knew putting the owlets back would be futile and there needed to be another way to help them.

The difficult decision was made not to re-nest Alice and Louie. To give the owlets the best possible chance of survival, they were transferred to The Owl Foundation where Alice and Louie will be raised by foster parents of their own kind. TWC would like to extend a big thank you to Dave, James, Jason, Penelope, Jake, Joel, Rebecca, Priya, and to the kind photographers and everyone who gave the baby owlets the help they needed. We are happy to know the babies will grow up in a safe and healthy environment until they are old enough to thrive on their own.

Watch this video to see more!